You're here because you want to know how to throw a watch party for the Insecure final season, huh? Cool. My birthday was last week and happened to coincide with the premiere of Insecure season three. So, of course, I had to throw an Insecure watch party and 29th birthday party all in one. I'm a big fan of Insecure and have followed Issa Rae's career since Awkward Black Girl on YouTube. I follow her and many of the Insecure HBO cast members (Why doesn't Y'lan Noel have more eye candy available online?!) on Instagram and have read her brilliantly-funny book The Misadventures of Awkward Black Girl. From dealing with micro-aggressions at work to navigating post-college life, to awkward dating encounters, to west African parents--my friends and I just find it all so relatable. Do you feel the same? Enough gushing. Let's get into the details of how to host an Insecure watch party.

If you're a wannabe hostess-with-the-mostest, check out these posts, too!

When planning my Insecure season premiere watch party, I briefly thought of asking everybody to come in LA attire but didn't want to overdo it. The venue was lovely already and we watched the show on a big screen projector so I restricted the decor efforts to a simple photo booth. This style of this DIY photo booth is a combination of the ones from my Christmas party and my cousin's bridal shower.

Get the tutorial and you can create your own for about $20 with a frame from Michael's, a simple solid paper backdrop and signs with iconic Insecure character quotes from the show. "Every black girl that went to college likes Drake." is my favorite! I made the signs quickly on Canva, which is my go-to for all kinds of party and blog graphic creation.

In thinking about what food and drinks to serve at an Insecure-themed party. I wanted to continue the Cali theme with the menu and what's more iconic than gin & juice out of solo cups? I didn't follow a recipe for it but, in case you're wondering how to make gin and juice, I basically combined one part gin with one part pineapple juice and 2 parts orange juice then garnished with some fresh orange slices. Easy, potent, and on-theme. 🙂 Also on the list was chicken & waffles--complete with hot sauce and syrup, which I outsourced in order to get the whole Roscoe's in LA vibe. 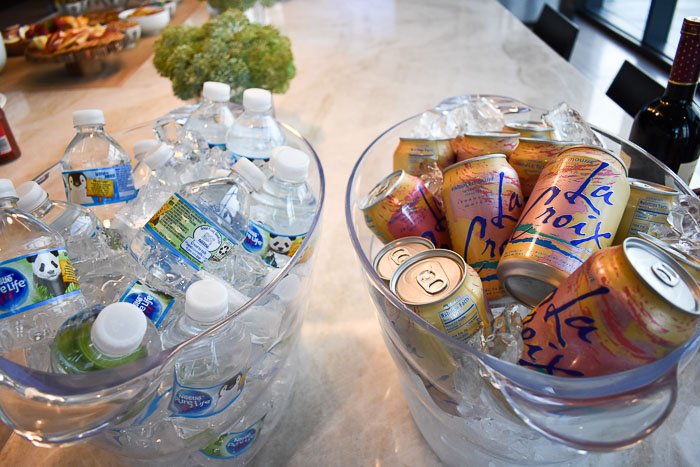 I like to create eclectic snack or grazing boards at big gatherings like these because they're easy to make and can include something for everyone. For this one, I laid everything out on butcher paper for easy cleanup. The grazing board components included, plantain chips, almonds, groundnut, pretzels, strawberries, apple slices, cheddar cheese, Monterrey cheese, M&Ms, mini pickles, and nut thins. If you have a smaller crowd or are just doing something more casual, you must have popcorn above all else! Everyone can bring their favorite bottle of wine to pair with the popcorn and call it a day. And because Insecure speaks to bourgeois up-and-coming Black millennials, I had to include a few cases of La Croix in the spread! With emphasis on the up-and-coming part, we drank out of red solo cups.

One of my biggest tips for throwing a bomb Insecure premier party is to set the right tone with your music. My Insecure watch party playlist was also Cali-themed, with old and new hits from West Coast artists (think YG, Pac, Kendrick Lamar, Snoop) as well as popping songs we've heard (and hope to hear) on each Insecure soundtrack (from artists like SZA, Cardi B, and GoldLink). You can listen to the playlist on Apple Music on on Spotify. Note: There are a few birthday songs on there, too.

Things to Know About Insecure HBO

If you aren't an Insecure fan yet...slide into the comments section because we seriously need to talk. I hope this Insecure watch party planning guide is helpful for you and that you enjoy the show no matter which season you're starting in on. If you're tuning into the final season premiere, know that I'm curled up on a couch somewhere watching with you. Thanks for reading!