If you're here for a slow cooker tailgate recipe, I gotchu with my pulled chicken sliders on Hawaiian rolls. This is a great hands-off recipe for hosting. You can start the chicken a few hours before your watch party and attend to other pre-party tasks while it slow cooks with minimal supervision. Let's get into the juicy details!

If you like flavorful slow cooker chicken recipes, check these out, too!

Despite the reputation chicken breast has for dryness, it's extremely easy to attain tender juiciness by cooking chicken breast with barbecue sauce in the slow cooker. You basically throw the ingredients into your crockpot and let the magic happen. I first made this saucy chicken in the slow cooker at a Christmas party and the reviews were stellar. Many guests assumed the meat was pulled pork due to the flavor and tenderness!

Making BBQ chicken sliders in the crockpot is simple and so is the ingredient list. Here's what to add to your grocery cart.

The slow cooker is a star player when cooking for a crowd because you can cook and serve the food out of it. Aside from that, you'll need a sharp knife and a mixing spoon. That's pretty much it.

How to Cut Hawaiian Rolls for Sliders Easy

King's Hawaiian rolls are the perfect little buns for for this Super Bowl sliders recipe and I have a trick for cutting the buns for sliders. Remove buns from package without separating them. Slice through the entire group of buns horizontally then separate all at once. This hack takes just two minutes! I use the same method when making Hawaiian turkey burger sliders, too.

The slow cooker BBQ chicken comes out so tender and succulent that no extra sauces are needed but I like to serve these with pickle and onion slices for garnish. And if you're making these easy chicken sliders for gameday or another gathering, you might be wondering what goes with BBQ chicken sliders? Here are some delicious ideas to complete your spread.

I hope you'll enjoy an occasion to give these a go very soon even it it's a weeknight dinner. And sharing is caring so be sure to share this pulled chicken sliders on Hawaiian rolls recipe for later and follow me over on Pinterest. Thanks for reading! 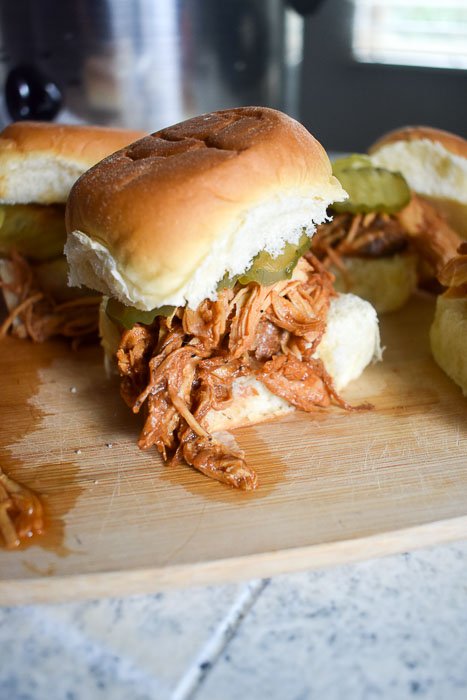 How to easily cut King's Hawaiian rolls for slider buns: Remove buns from package without separating them. Slice through the entire group of buns horizontally then separate all at once.