Slow cooked, tender and flavorful Moroccan-spiced chicken is what's for dinner. This recipe is twist on a chicken tagine, made in a slow cooker and was my first foray into North African flavors and I've since become hooked. I know you will, too, based on both the amazing deep flavor and the convenience of making it all in a crock pot. Let's get into the details.

So, what is a tagine?

Tagine is both a cooking vessel and the dish made in it. A tagine pot is shallow and made of clay or ceramic with a cone-shaped lid, which yields super tender food. While not shaped the same, a slow cooker comes close as far as the results. Easy slow cooker meals are my jam, especially when I don't feel like putting forth much effort in the kitchen, so I was excited to use my slow cooker as a tagine.

This chicken dish calls for some ingredients that you probably have on hand and a few you might need to make a grocery run for. And if you aren't familiar with Moroccan and Mediterranean cuisine, you might be confused of the combination of chicken with flavors like cinnamon and mint. But it works. Here's everything you'll need.

All of these ingredients come together in the slow cooker after the chicken and onions get a quick sear in a cast iron skillet. You'll also need a good, sharp knife on hand, a cutting board, and wooden kitchen spoon. Lastly, grab a mixing bowl to combine the spices in. Now, we're ready to cook!

Do I Need Preserved Lemon for a Tagine?

Short answer is yes. For authentic flavor, you should use preserved lemon. What is preserved lemon? Preserved lemon has a salty, intense lemon flavor with a hint of umami that joins the party as the mixture ferments in a jar. My first time making this recipe, I kind of felt my way through making healthy slow cooker chicken thighs with the loose idea of a chicken tagine in mind and the resolve to use some of the grapefruit I preserved from my parents' tree a couple of months ago.

Many Moroccan dishes, especially tagines, call for preserved lemon so I was hyped to whip out some of the grapefruit and see if it worked just as well. And it did! So feel free to use different kinds of preserved citrus if you can't find lemon or are just feeling adventurous when you make it. My friends that tried the first batch didn't even realize it wasn't lemon so it's a good substitute. I followed a tutorial on how to preserve lemon to preserve the grapefruit with just kosher salt and its own juice. I didn't shake or turn the jars every day, as indicated, and mine turned out well.

What can I use instead of preserved lemon in a tagine? If you don't have access to preserved citrus--lemon or grapefruit, as I used, you can just thinly slice up a couple of lemons (peels included) to capture a similar flavor or combine flaky sea salt with lemon zest.

What are Moroccan Spices?

Below are common spices and herbs used in Moroccan cooking, some of which you see in this spiced chicken thighs slow cooker dish. You can make a Moroccan spice blend for chicken with different flavors from this list for juicy grilled skewers, roasted thighs, and even hearty beef chili.

Does slow cooker need to be preheated? Nope. Crock pots heat up quickly and any good slow cooker recipe will account for heating time in the cook time.

Is it better to cook on low or high in a crockpot? That really just depends on how much time you have. The way that slow cookers are made, either temperature setting will lock in moisture and flavor in your finished meal (Though it is possible to overcook something in a slow cooker!) so choose according to your schedule. My slow cooker has a "Keep Warm" setting that comes in handy when I'm not exactly sure what time I'll eat or am entertaining.

What other cuts of chicken can go in a slow cooker? Really...just about all of them! You can slow cook chicken wings, make shredded chicken breast for tacos or enchiladas or pulled chicken for easy BBQ sliders. I have even seen whole chickens finished in a slow cooker.

Lastly, while I'm not following a Whole 30 or gluten-free diet, this dish is in line with both of those so I'm very happy to be able to share it with a lot of my friends who are! This is a great all-in-one chicken dinner to make for guests or add to your weeknight dinner rotation. You can cook it pretty quickly on a high setting or on the stovetop or set it earlier in the day and let it cook slow and low. Either way, I hope you enjoy soon and very soon. And sharing is caring so be sure to pin this slow cooker chicken thighs and potatoes recipe over on Pinterest. Thanks for reading!

How to Make Chicken Tagine in a Slow Cooker 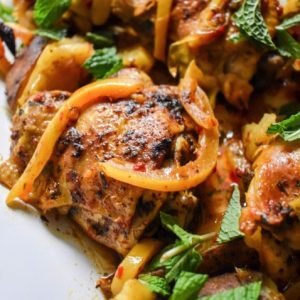