The holidays are ripe for busting out those showstopper dishes that call for love and care on the ingredient list, which is why I developed an extra cheesy mac & cheese recipe with bacon for you. Let's get into the delicious details.

First: Get completely set for the season with my Holiday Dinner Guide!

And if you're looking for special Thanksgiving side dish recipes, try these, too.

Is Macaroni and Cheese a Soul Food Recipe?

The short answer is yes. The baked Black folks macaroni & cheese recipe that would become an icon of American cuisine, originated with James Hemmings. Hemmings was an African American man who was enslaved as Thomas Jefferson's classically trained chef. This soul food mac and cheese with bacon builds on centuries of Black culinary tradition and ingenuity.

My three cheese mac recipe comes together with just a handful of ingredients. Here's what to add to your grocery list.

As far as tools, you'll need a skillet or dutch oven to make the cheese sauce in. Grab an oblong pan to bake up macaroni and cheese with crispy edges, as well as a food processor with a disc attachment for shredding the cheese.

Shredded cheese is ideal form to use when making homemade mac and cheese but the pre-shredded kind you might pick up at the grocery store isn't the best choice. I always recommend shredding the cheese yourself.

Use a food processor with a shred disc attachment to shred cheese quickly. At the press of a button and in just a few minutes, you can shred several cups of cheese for making special mac and cheese for Thanksgiving or any occasion. I use this same trick to make my browned butter mac and mini mac & cheese cups.

How to Crumble Bacon Easily

My mom taught me a simple, time-saving tip for making crispy bacon bits at home. It's fabulous in this recipe and you can use it others, too.

What to Serve with Mac & Cheese with Cavatappi Pasta

I have a full soul food holiday recipe lineup of dishes that pair well but if you're whipping up this mac for a weeknight meal, match it with a couple of the dishes below!

And sharing is caring so be sure to pin this cheddar bacon mac and cheese and follow me over on Pinterest. Thanks for reading! 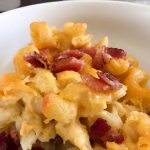