Breakfast meets dessert in a bread pudding that tastes as delicious as a batch of ooey-gooey cinnamon rolls complete with an icing glaze drizzled over top. Originally published October 2018. Last updated November 2022.

As a lifelong member of the "and now I need something sweet" club, I know a thing or to about unique sweet treats. My cinnamon roll bread pudding is exactly that because it evokes all the flavor of cozy morning buns but for dessert. I wouldn't even bat an eyelash if you enjoyed it as a breakfast bread pudding. Let's get into it!

If you like flavored bread pudding recipes, try these, too!

You've probably seen several recipes for cinnamon roll bread pudding with refrigerated cinnamon rolls. This is not that. But it still tastes like sweet, buttery, spiced cinnamon rolls in a different format. If you've ever had a Cinnabon Pecanbon, the sticky sweet glaze and crunchy pecans in this recipe give it similar vibes.

What's the best bread for bread pudding? Thick and substantial, fully-baked bread is best. I typically use French bread but challah, brioche, or Texas toast work just as well.

Must I soak the bread for bread pudding? It's not at all necessary. Especially if you don't want soggy bread pudding. I make bread pudding all the time without soaking more than a few minutes.

Can I make bread pudding in advance? Yes. This is a great make-ahead dessert idea for parties. You can simply prep all the ingredients in advance, pre-soak the bread in the custard, or even bake ahead and store, which is my method for easy holiday dinner prep.

Why did bread my pudding fall? Bread pudding puffs up while baking then collapses or flattens to be about even with the rim of the baking dish. This is normal as there's no rising agent used in baking bread pudding.

Grab a mixing bowl and silicone spatula to mix and smooth the bread pudding base. And of course, you'll need a baking dish for the bread pudding, preferably a glass one in order to see the doneness.

I hope you thoroughly enjoy this easy cinnamon roll dessert idea very soon. And sharing is caring so be sure to pin my spiced bread pudding recipe for later and follow me over on Pinterest. Thanks for reading! 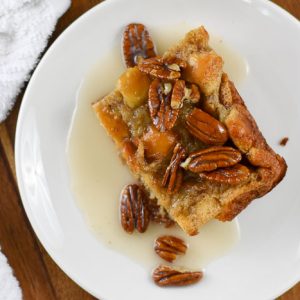 For the Bread Pudding